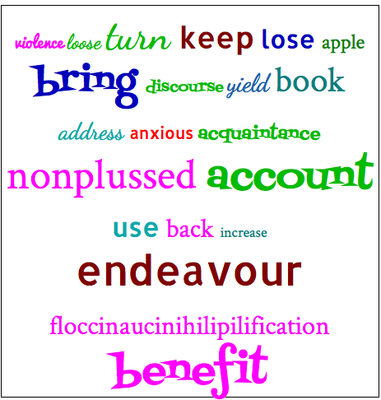 The Oxford Dictionaries have issued a post on the most looked-up words of 2011, and the results are intriguing.

Some of the words that dictionary users are most interested in are recent additions, such as LOL, OMG, nom nom, and sexting, not to mention Woot! And naturally there are people wanting to know how to spell certain words, which was what frustrated the British comedian Tony Hancock, who complained that you needed to know how to spell it in order to find it in the first place.

What intrigues me, though, is that everyday words like take, look, come, go, turn, and put all rank in the top 20, with get coming very close to taking the top spot.

These are among the easiest words in the English language to spell; the people looking them up are searching not for help with spelling, but for an understanding of the meaning, or rather meanings, of such words.

I wonder if the dictionary database can provide information on who these people are. My guess is that many or most of them are native speakers of another language grappling with the complexities of English. Those of us who grew up speaking English might well wonder about “nom nom” or about “Woot”; we are less likely to puzzle over how to use “go” or “get.”

A new word to me is floccinaucinihilipilification, which ranks highly in the Oxford dictionary search monitors more because of its length than because it is often used, though it might have a future in extreme literary criticism, since it means “the action or habit of estimating something as worthless.” The longest words listed in the dictionary are antidisestablishmentarianism and pneumonoultramicroscopicsilicovolcanoconiosis, which has staked its numerically superior but specialized claim.

The most looked-up word in 2011 turns out to be kawaii, which was only added to the dictionary in August 2010. A loanword from Japanese, “kawaii” means “cute,” and is popular with fans of anime and manga. Which suggests that users of the dictionary include not only significant numbers of students of the English language, but an awful lot of people who are young.