In the ancient town of Rye,  one of the Cinque Ports along the coast of southeastern England and rising above the Romney Marsh, I stayed for a week in a 300 year old cottage on Mermaid, a cobblestone street reputedly one the five most famous streets in the world. Not researching to learn the names of the others, my reasonable guess is Fifth Avenue, the Nevsky Prospekt, the Champs-Élysées, and Fleet Street, if only because I have walked those famous avenues. Besides Mermaid’s mediaeval, Tudor, and Georgian residential architecture and cobblestones, the street is one of the steepest in town, but the distinction for most rigorous climb belongs to Conduit Street, a few minutes’ walk away. Mermaid seems too short to belong in the same company as Fifth Avenue, but distance, like longevity, is not always a factor in determining reputation. One recalls the brief lives of Keats and Rimbaud, so a short street may compare with any golden mile. 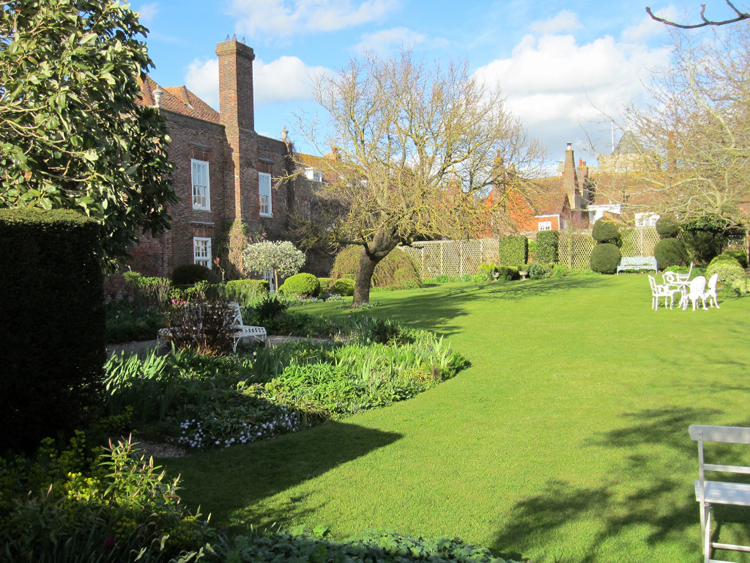 The garden of Lamb House

One English afternoon after a burst of rain, I meandered, sat and pondered in the walled garden of Lamb House, the elegant Georgian residence where Henry James lived from 1898 until his death in 1916, situated just around the corner from my cottage. Waiting to be visited by the spirit of the Master like the apparition descending the stairs in The Jolly Corner, an eerie and brilliant story of what might have been, I’d like to say that my thoughts turned to matters of genius, fame, the purpose of existence, the transience of life, and ultimate fate. A graveyard half-hidden in a corner of the garden in which James interred various pets should have made such thoughts natural. Everything was so deeply and wonderfully green, especially to a Canadian amateur gardener recently emerged from a dreary winter, that I could not take pleasure in last things. The layout of the garden with its perennial beds and shaded paths surrounding a central lawn encouraged me to slip into a horticultural reverie. I dreamed about compost and redesigning my own various gardens at home, or at least attempting to espalier a vine or tree against a wall. I shall probably do no such thing, but at the time it was nice to think so.

James laments in a letter to a friend – and what letters the man wrote – that he didn’t know what to do with the walled garden attached to his recently acquired residence, as well as a garden house whose bay window protruded onto the street, until he hired the services of a professional gardener, a friend who was also a landscaper. And then the magic happened. The Master of increasingly convoluted, prolix and metaphorically subtle prose of high civilization and exquisite manners glossing over moral turpitude and savage passions became intrigued by seeds and growing things. When I visited in early April, the mahonia had already flowered, daffodils were past their prime, and other bushes were bursting into bloom.  A hoary Bignonia vine supported by the north wall of the garden was until fairly recently all that remained of James’s original plantings. It exists no more. Even perennials, their name notwithstanding, attenuate and must face the inevitable.

The Garden House in which James wrote or often dictated his later novels to his amanuensis Theodora Bosanquet was directly hit by a bomb during an enemy flyover in 1940. Lamb House was not a specific target. The Norman St. Mary’s Church down the road lost its roof. The bombing of Rye served no strategic purpose except to wreak general havoc and terrorize the population. People perished, I was informed by a kindly gentleman inside the house where we both perused photos of the destruction. Opposite St. Mary’s, and occupying space scarcely larger than a nook, is a second-hand bookstore, open for business occasionally, where surprising titles are to be found. Not surprisingly it is called The Tiny Book Store. It is packed with paperbacks and hardcovers from floor to ceiling, and there is standing room only. The proprietor, a man who gives the impression of looming, in a friendly sort of way, is keen on chatting, so one does. 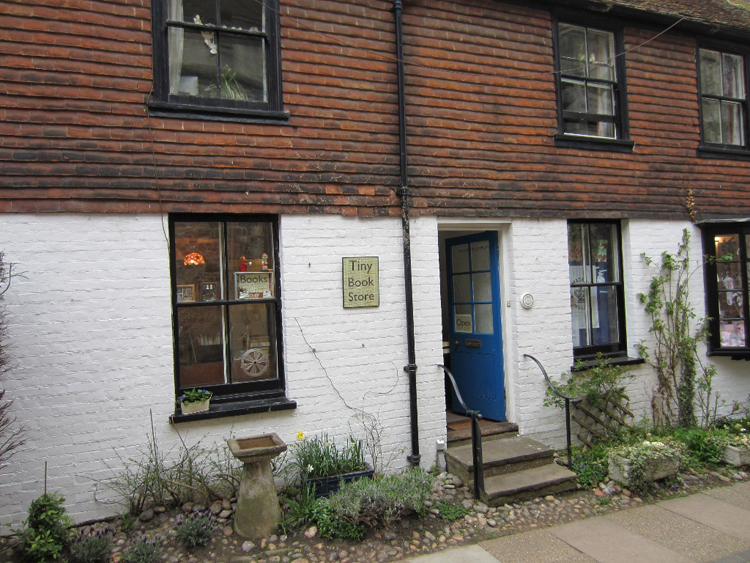 Many literary figures are associated with and resorted to Rye. Fletcher, the Jacobean dramatist, was born there. After James, E.C. Benson lived a while in Lamb House, and the town of Rye is represented as Tillings in his Mapp and Lucia novels. Rumer Godden, author of Black Narcissus, who enjoyed an interesting childhood in India, dwelled there after Benson’s demise. Conrad Aiken and his daughter Joan, also a writer, stayed for a time in Jeakes House, just down the street from my cottage. Radclyffe Hall of The Well of Loneliness fame resided in various spots about town.

Joseph Conrad, H.G. Wells, and Virginia Woolf, among others, stopped by occasionally, and the garrulous James, always gracious, entertained them in his front parlour or dining room, both of which provide access through French doors to the garden. Sketches of the visitors hang on the wall of the foyer opposite the curving staircase. One is not allowed upstairs. With some trepidation James installed a telephone in a small library off the central hall and called it, appropriately enough, the telephone room. The lovely bluish and patterned Delft tiles with which he lined the interior of the fireplace in the parlour and the telephone room remain a testament to the author’s sensibility and to their durability under fire. 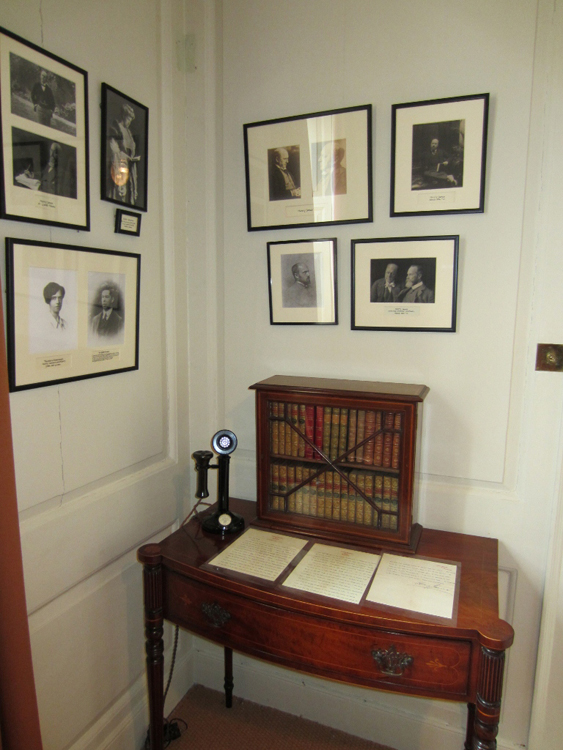 Why a town becomes a gathering place of the literati is a subject for literary histories. In Rye’s case, it may well have been the seductions of the past, which certainly seduced James. Local beauty, a refuge from metropolitan clamour and social engagements, convenient train links to London, and cheap rent (then, not now) perhaps account for much. These days Rye, still embraced by artists, attracts British and European tourists for the most part. I heard French, German and Spanish on the streets. To be sure I did visit early in the season, avoiding the summer crush which promises to be especially dense during Jubilee and Olympic year. One feels, however, that Lamb House would not attract more visitors than can be accommodated around the table in the dining room overlooked by John Singer Sargent’s portrait of  James. In the garden a tangible serenity reigns.

The streets of Rye will be thick with visitors, but Lamb House will retain a sense of privacy and remoteness from the madding crowd; the building is in fact, despite its National Trust affiliation, still a private residence. Rye has maintained its local integrity and has handled the influx of tourists and the commercialization of medieval and later quaintness with aplomb. Ordinary citizens indifferent to James live and work here and go about their business quite separate from the needs and demands of the tourist trade. Stout ale, scones and clotted cream, lamb pudding, kidney pie, bangers and mash, fish and chips and tea cakes are to be had virtually on every corner. I bought a pair of Wellington boots in a dry goods store not necessarily catering to foreigners. They are perfect for mucking about my gardens. For those so inclined, freshly slaughtered lamb is available at the local butcher’s. This is after all sheep country. To correct any misconception, Lamb House is named after the family who built it in 1722, and not a frolicking, succulent creature.

Cobblestone streets possess a precarious charm. Oxen or donkeys pulling carts and wagons perhaps managed in their time with greater dexterity than contemporary pedestrians. I imagine James attempting to retain his portly dignity as he descended Mermaid Street unless he depended exclusively upon a hired cab to get him from the hefty black front door of Lamb House to the station literally down the street to catch the London train. He was a great walker about town, and two of his walking sticks are attached to the telephone room fireplace. Walking is really the only way to experience a town like Rye. Sidewalks are narrow and tend to disappear. Cars and lorries suddenly surge around bends in the road. The cobblestones in the medieval and Tudor part of town surely would have been no less rough and slippery for the great man of letters than it is for lesser lights, but there is no record of his having twisted an ankle. In the garden personal injury is the last thing to enter one’s mind. 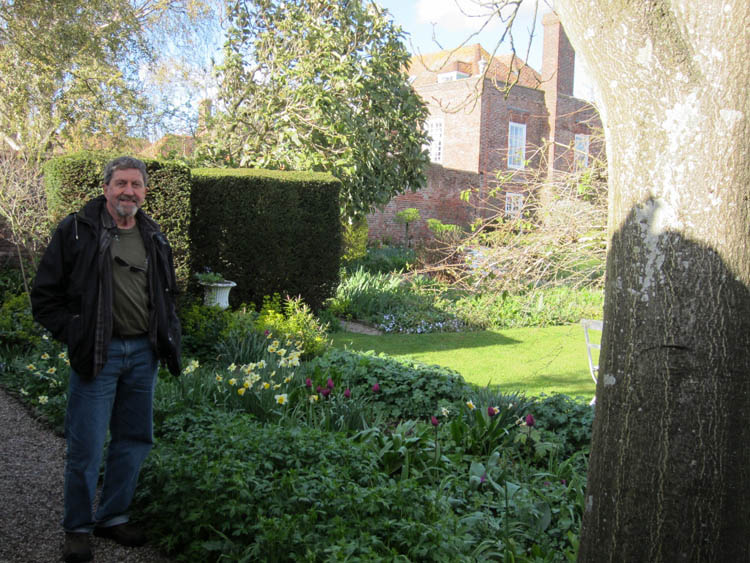 Kenneth Radu in the garden of Lamb House, April 2012

Kenneth Radu is the author of several books (fiction, poetry, and a memoir), the most recent being a volume of short stories, Sex in Russia (DC Books).A new collection entitled Earthbound is also forthcoming from DC in the not too distant future. He is currently working on a novel manuscript, other stories, and now and then enjoys writing something else. He lives near Montreal. 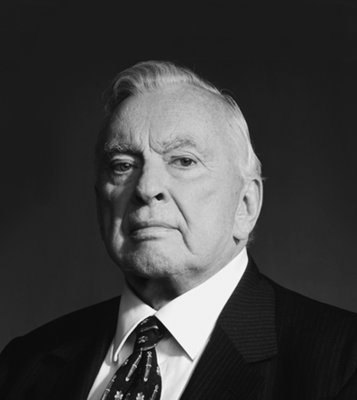 The Globe and Mail wins the prize for obscurity.

Lebanon: No Going Back

Carolyn Marie Souaid remembers a country of promise and hope, but also a land of despair and ruins.

Stephen Harper Explains It All To You, by Warren Clements

I don’t know how many times I have to explain this to you people.