Linda Leith: Now that you’ve actually got copies of Apocalypse, what are your thoughts about this new novel of yours?
Jennifer Quist: Now that the book is in the house, my family members are starting to read it, which is nerve-wracking. I don’t share my projects with them until they’re already published, so it is truly an unveiling. My twelve-year-old picked up a copy after school today and read the first chapter. I warned him it was about murder and stuff but he said he could handle it. At the end of the first chapter, his comment was that he appreciated me using the name “Ogopogo” instead of the Loch Ness Monster because it was more authentically Canadian. Sounds like I underestimated him.

LL: This is the third novel you’ve published with LLP, after Love Letters of the Angels of Death (2013) and Sistering (2015). That’s five years – longer, if we include the time before Love Letters actually saw the light of day. Do you see yourself as having evolved as a writer over this period of time?
JQ: I do. After Love Letters was published I wondered how I would ever write anything else. As my first book, it was made up of all the best thoughts and scenes and turns of phrase I’d been able to imagine during my entire life up until that point. I was worried I’d have to live another thirtysomething years in order to write another book. Clearly, I didn’t have to wait that long and the best way I can think of to explain it is that writing fiction must involve a certain way of witnessing and dealing with the world. Maybe once we adopt those ways our writing process becomes more efficient and deliberate than it is in the long, scattered process leading up to a first novel. I do wonder about my future evolution, especially since I’ve returned to academic writing. I have a professor who has warned me more than once that academic writing (which is generally terrible) might corrupt my creative writing. I’m keeping an eye on it.

LL: How do you see this evolution? What has changed in your work since you started out as a novelist?
JQ: When I was a teenager writing gothic horror stories, my dad once looked up from one of them and told me about an interview he’d just seen on the news with a Canadian writer he couldn’t remember by name who said she was pleased that she had managed to gain more “control” over her writing talent as her career progressed. It was a very nice way for my father to try to tell me to tone it down. I am feeling like I’m more under control now. I hope it’s a good thing.

LL: All your novels focus on women characters, and all of them focus on family. Can you comment on what these novels have in common?
JQ: The narrator of my first novel was a man but the book was his address to a woman he was intimately related to, his wife. In that way, I suppose the book was about her. Maybe it’s simply that family is a nearly universal experience—the human experience. I think it’d be difficult to write outside it. What does Foucault say again? “There is no outside....”

LL: There are many remarkable women in your novels, but Morgan is a whole new kind of female character. Where does she come from?
JQ: Morgan and her family came to me when I was watching a police press conference on television. The family members of a young woman who’d been killed sitting in her wheelchair when she triggered a pipe bomb that had been left on her doorstep disguised as a Christmas gift were sitting at a table answering questions from reporters about this unthinkable crime. As I watched, I was struck by how rural-Alberta-normal the family was. Their faces, clothing, manners of speaking, their muted bewilderment at the situation—it was all so normal and at the same time so bizarre. How were they supposed to go back to ordinary lives after what had happened to their daughter and sister? How could anyone move forward from there? These were questions I had in mind when I started exploring the possibilities through writing the story. I went on to exaggerate Morgan into the quiet, watching, wondering character she became. But at every point she has felt very familiar to me—she felt normal.

LL: You’re a Mormon, and though there are signs of that in the earlier books, Apocalypse is the first to identify characters as Mormon. Was it a conscious decision on your part to bring that to the fore in this book?
JQ: Morgan is looking for some meaning to evil. She’s unmoved by her father’s glib approaches to secular explanations, finds her mother’s ideas of justice empty, and so it made sense to me that she’d turn to a place people have consistently turned to find this kind of meaning—to religion. People are generally bad at writing as sincere adherents of religions they don’t practice—something like a kind of appropriation--so I had Morgan’s guides take on my own religion, which I actively practice.

LL: Why was that something you wanted to do in this novel?
JQ: When I set about writing explicitly Mormon characters in a novel for the first time, I hoped to accomplish nothing by it except what the story required. However, in the years I’ve been working on this novel, I’ve become more aware of the Mormon depictions in popular culture in the United States, both as we’re characterized by people inside and outside the Church. Depictions from outside the Church, like the Broadway musical mocking Mormon missions like the ones my father, brothers, husband, and son have (or currently are) serving are extremely offensive. There are all kinds of people in the Church, but my book’s prosecutor character and his sister certainly represent one type of former missionary, and not a rare type. Far from being silly and credulous, they’re intelligent, educated, inquisitive, rational, and capable of complicated, sustained reasoning and logic about everything including their spirituality. Still, I didn’t mean to create these characters in response to the hateful depiction of Mormons. I created them because they are like many people I know. They’re like the people I know best. On the other hand, treatments of Mormonism by people inside the Church can sometimes tend toward self-exoticization, leading to a different type of problematic representation. The truth is, people of all kinds are far more similar than we are different and I see no value and much harm in magnifying differences especially if it’s mostly for the sake of satisfying a larger discourse accustomed to seeing Mormonism as exotic and ominous and willing to pay to hear that spoken by native informants.

LL: This new novel begins in a fairly closed-in world, in which Morgan is in a family context, at work, or in the courthouse, but it opens up as the novel proceeds, and there’s a sense that this is the start of something new not only for Morgan but also for you. Can you comment on that?
JQ: Isn’t that lovely? I hadn’t thought of that. My life is certainly different now than when I released my first book in 2013, after writing it sitting on my bed at home in a small town while my toddler played on the floor. I remember standing onstage at the Blue Met International Literary Festival during the tour of Love Letters, after watching the illustrious authors from Linda Leith Publishing reading from their work. I spoke into the microphone, saying something about how I only had one university degree, knew only one language, had been on only one continent, and had only one book, but that book had my whole heart in it. Except for the line about my first book having my heart, none of those other things is true anymore. I still write in the teeth of our domestic world--at a desk now, but one set up in our laundry room--and I still spend an awful lot of time buying groceries and taking other people to the dentist, but circumstances have aligned for me to reengage with the world. There have been times in my life when there wasn’t much more to the world for me than my body and the bodies of my children. I learned a lot during those times, I take all of that with me, I need it, but I am glad it’s in the past.

LL: In the bio used for the earlier books, you mentioned the fact that you have five sons and described yourself as a boy-raiser. Is that how you see yourself today?
JQ: I sound so old when I admit that two of my children are now grown men. They were born during my early twenties! I still have three boys at home. The oldest of them can drive, the youngest is ten and very independent. I don’t know whether that’s a credit to him or an indictment of me. Caring for my family now involves less physical work but more intellectual and emotional work than it once did. It’s different in quality but not quantity. However, I feel like speaking of childcare as if it was the primary way I use my time isn’t genuine anymore. All day long, there is no one in this house raising anything. 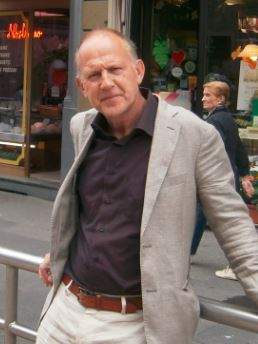 A practical guide for new Canadians - Step One, by Felicia Mihali

Arrival — Save your pennies